The space isn’t just about the colors on the walls and the wallpaper I pick. Aesthetics are important, but It’s also about creating a body-positive space. Since bra fitting is so intimate, it’s important to do it in an atmosphere that’s comfortable and welcoming and makes you feel good.

In her testimonial, Emma talks about her early bra-fitting experiences as shaming. Every week on the Reddit group /r/abrathatfits, I see more stories from people who have had humiliating or frustrating experiences shopping for lingerie. People talk about being blamed for having the bodies they have, about getting forced into sizes that don’t fit, about not being listened to. I’ve seen stories of people leaving bra shops in tears.

It’s of paramount importance to me that Revelation is a welcoming space. One way I will accomplish that is by approaching bra fit as a collaboration, not a pronouncement from On High. If you are getting a fitting from me, you are using my expertise, but you know your body better than I do, and I will listen to you.

Another way is language. There are plenty of negative words about how people are shaped and I don’t see a reason to use any of them. I’ve seen online fit guides about what to do if you are “saggy” or “oversized” or “abnormal.” Better to use positive or neutral descriptors like “full on top,” “shallow,” or “projected.”

If a bra doesn’t fit you, it’s the fault of the bra, not your body. When you visit Revelation, I hope you will feel supported in more ways than one.

I mean, I knew it was bad. I’ve known it was bad since 2000, when I found an English bra calculator online and decided to stop putting up with the awful matronly “minimizer” bras in 34DDD that I could only find at distant outlet shops and made me feel dowdy and terrible. I don’t remember what caused me to look online in the first place, but I do remember being shocked at two things: my new size (30G), and finding multiple bras in my size. Bras in exciting colors! Not white or beige! Heady with all the options, I went for the one that was most unlike anything I’d ever worn: a super sexy plunge bra in gold. It had flames on it, people.

Hang on, I think I still have it. Lemme see if I can dig it out for you. 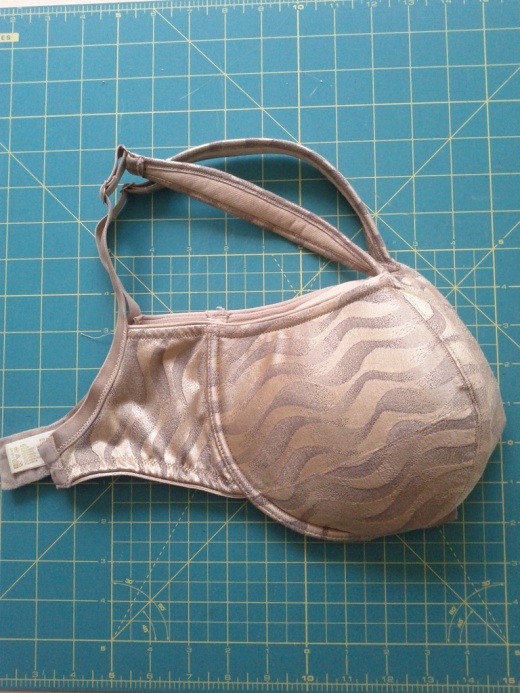 When I tried it on, it was a revelation in fit. Up until that point, I had no idea that bras could fit and feel good. It stayed put all day, without the band riding up. I didn’t have to shorten the straps so much that they dug in painfully. Most surprising of all, the center front was perfectly flat. All my other bras stuck out a good three inches at the center front. I didn’t know that a flat CF was even possible.

Since that first proper bra thirteen years ago, I haven’t set foot in an American bra shop. (With the exception of Nordstrom, but they are expensive and even though they carry British bras, their range isn’t great. I’ve been all of twice, I think.) I’ve done all my lingerie shopping online, first through Maple Drive and then through Bravissimo. I’ve learned a lot about style and fit, and what works and what doesn’t for my particular shape. (More on that in another post.)

Recently, I took a friend shopping to find her a bra. This was my first real experience trying to find a bra that fits in brick and mortar stores in over a decade. As I said at the top, I knew it was bad, but I didn’t know it was this bad. I’ll tell that story in my next post.