I’ve been talking about what makes a good fit and what doesn’t, but all this is so much easier to see with pictures.  One of my friends has graciously granted me permission to post photos that clearly illustrate some fitting issues.

We’ll start with one that she’d been professionally fitted into by Victoria’s Secret. (I believe it’s a size 36C.) 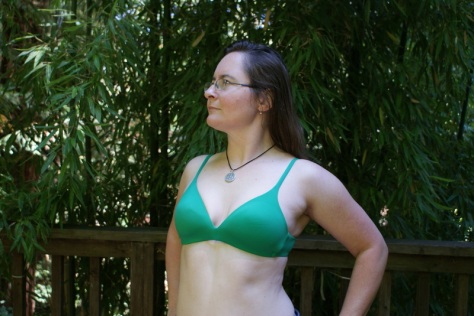 Not too bad, right? It looks like it’s about the right size. There aren’t many obvious problems; she’s not spilling out of the cups, it’s not obviously too large, and doesn’t she look cute in it?

Now some problems are coming into focus. We can see that the gore (that’s the center front in the middle between the cups) doesn’t lay flat against her chest, which is a sign that the cups are too small. We can also see that while the cups cover her, they don’t contain her breasts that well. It’s not a good fit.

From this angle, we can see that the top of the cup cuts into her breast instead of making a smooth silhouette. We can also see that the lower edge of the cup is nowhere near the underside of her breast; it’s basically hovering in front of her chest instead of providing support from underneath, as it’s supposed to do. 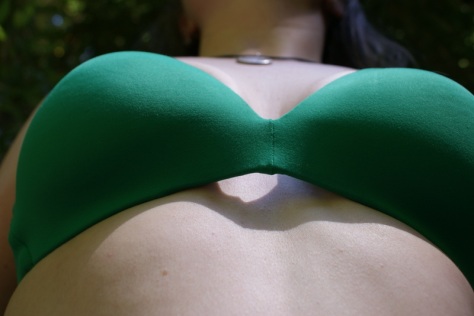 This is a strange angle, but I really want to show just how far off that gore is. It’s supposed to meet her chest, but there’s quite a bit of space there.

Check out how far I can pull the band out. Now, the support of a bra should come almost entirely from the band; you shouldn’t need to use the straps to compensate for support. People who wear larger cup sizes may need to have some strap support, but I’d say it should be no more than twenty percent, at maximum, with the other eighty percent coming from the band. The straps are there to shape and support the cups, not your breasts directly. If you make the straps do all the work, it will be very uncomfortable; you’ll end up with red marks and dents in your shoulders, and it’s terrible for your posture. With a band as stretchy as I’m demonstrating here, it’s clear that she’s getting no support from it. This band is way too big. Couple that with the hovering gore illustrated above, and we have a bra that’s too big in the band and too small in the cup – which is very, very common.

On to the next bra! 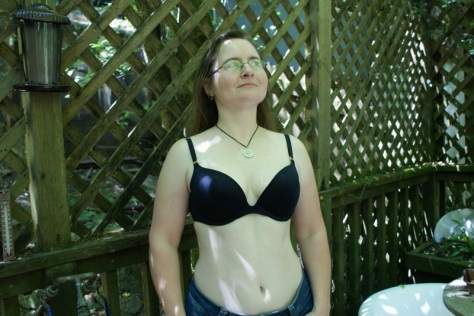 This one is another 36C that she was professionally fitted into by Victoria’s Secret. Again, from a distance, this doesn’t look too bad. Up close, though…

Whoa! Look how far that gore is! This is definitely not a good fit. (Note that I’m not pulling the bra at all; it really is that far from her chest.)

From here, you can see that the cup doesn’t make a smooth line with her breast. In fact, the cup looks too big – but we know from the gore sticking out that the cup is actually too small. What’s going on here?

A couple of things. This bra is both the wrong size and the wrong shape for her. The absolute cup volume is correct, but since it’s a different size, the shape of the cup is different. This is why it’s possible for it to look too small and too big simultaneously. Her actual size is 32DD and this bra is 36C. Since cup size is relative to band size, the absolute volume of 36C = 34D = 32DD. Even though the volume is the same, the dimensions of a 36C are different from a 32DD. Not only that, this is the wrong type of bra for her shape, and even if this was a 32DD, I don’t think it would fit her. It’s a molded cup bra, and the cut of the bra simply does not match her shape. My experience with molded cups is that you pretty much already have to be whatever the shape of the mold is in order to fit it, which is pretty rare since breasts come in all sorts of shapes.

Next one! This is another Victoria’s Secret bra that she doesn’t wear much (and hasn’t worn it at all since she got proper bras), but it’s useful because it illustrates a really common problem.

Okay, pretty much anyone can see that this is a bad fit. It’s not supporting her at all and it’s obviously too small. How can we fix it? Well, one easy solution is to tighten up the straps as much as possible. 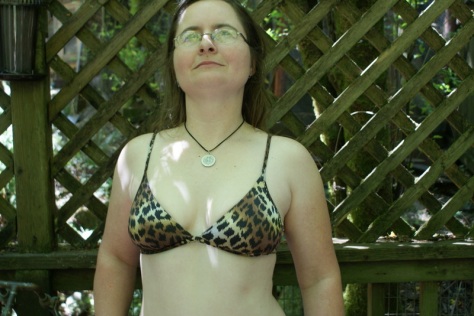 That’s much better. It doesn’t look perfect, but at least she’s getting some support and coverage out of it, right? Well, maybe.  The strap-tightening has side effects. 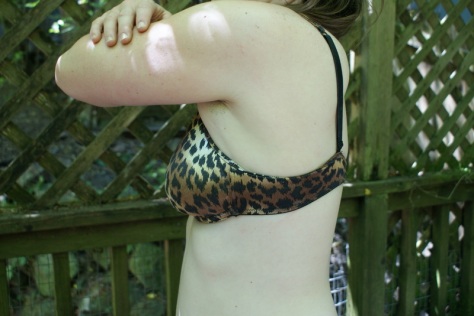 Remember how I mentioned that the support should all come from the band? Yeah. That’s not happening here. The band should be completely level all the way around, but it’s riding up her back because the straps have been called into service to give support, and they simply aren’t up to the task. A band that rides up is uncomfortable, and you’ll be fiddling with it all day. The band simply can’t provide support if it’s pulled higher than the cups.

I see bands that ride up all the time because people who need cups that are larger than DD – which, let me emphasize, is an average cup size, not a large cup size – compensate by buying bras with larger band size. This sort of works because cup size is relative to band size, so if you move from 32DD to 34DD, you’re increasing not just the band size but also the absolute cup volume. Unfortunately, if you do this, then your band size can be far off. For instance, my actual size is 32HH (UK). If I tried to sister-size to a bra that is available in American stores, it would go like this: 32HH = 34H = 36GG = 38G = 40FF = 42F. The equivalent American size of 42F is 42DDD (usually – American sizes are inconsistent), which is ludicrous. That’s five sizes too big in the band; there’s no way it would fit me. I would have to tighten the straps to an inch of their lives, and the band would end up so high that I might as well wear it like a collar.

Let’s move on to a bra that actually fits.

This is her actual size – 32DD – and look how much better it is. Everything is smooth but not too tight, and she’s properly supported instead of just being covered. If you’re wearing a bra in the first place, you want it to give you support, not just act like a vest for your boobs.

Take a closer look. The gore is tacking (that’s bra-fit jargon for “lays flat against your chest”), the wires neatly define the underside of her breast, which means they can do their job of providing support and shape, and the top of the cup makes a perfectly smooth line with her natural shape. This is a really good fit. 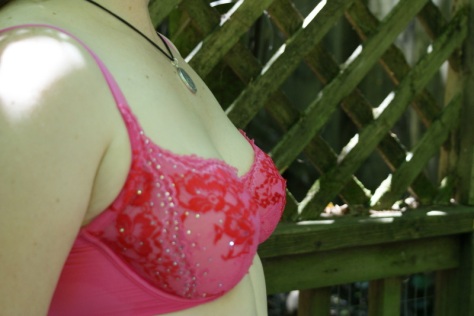 From this angle, you can see that the underwire follows the shape of her breast. If the wire were too far forward, it would be sitting on breast tissue, and if it were too far back, it would be cutting into her armpit. As it is, it’s exactly where it needs to be. 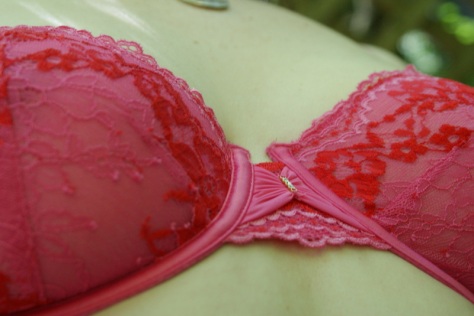 Compare this shot with the same angle from the teal bra. See how the gore is completely flush instead of standing out in space? 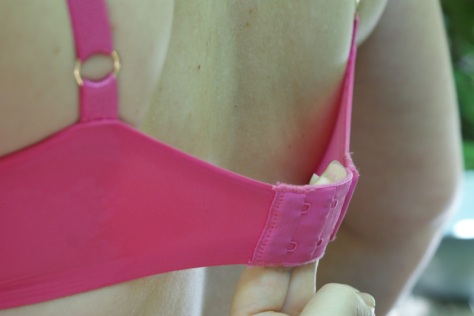 This is a much better amount of band stretch. It’s perhaps a little too stretchy for my taste, but it’s snug enough that it provides good support (and this is a Victoria’s Secret bra, which are notoriously stretchy anyway), and in any case I’m not the one wearing it.

Let me know if you have any questions or comments about bra fit.

Special thanks to my lovely model!

6 thoughts on “An In-Depth Fit Analysis”